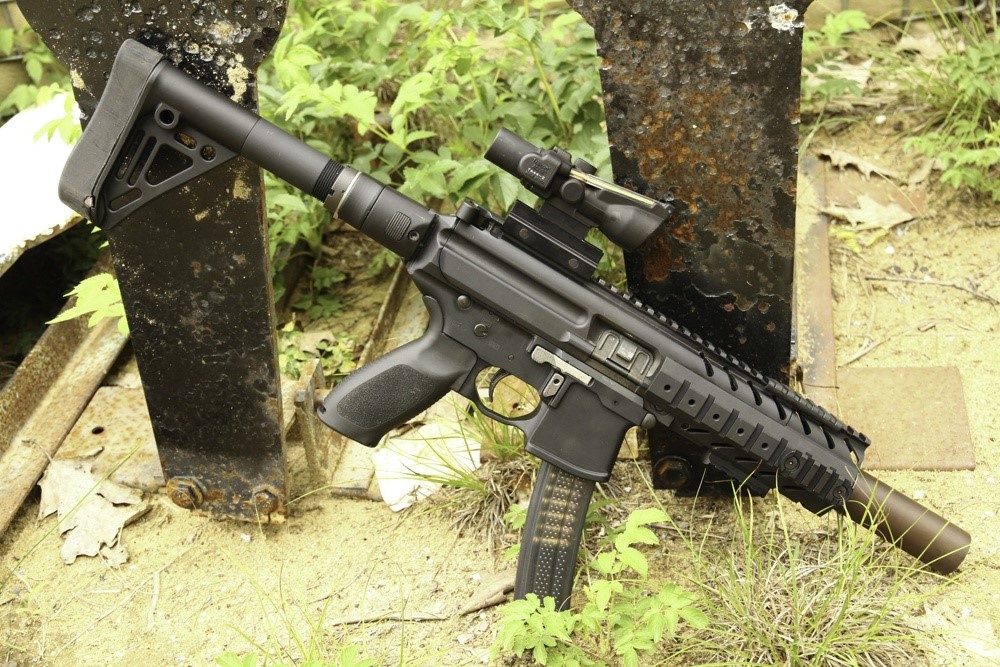 An AR-15 pistol may be defined as any AR-15 platform weapon with a barrel less than 16 inches in length. Unlike conventional AR -15 rifles, an AR-15 pistol doesn’t sport a proper gunstock, and it is not more than 26 inches in overall length.

Basically, it is a smaller version of the AR-15 with a shorter barrel and no or very small stock. There is no need for AR pistol owners to go through the NFA process. Such pistols are available either in parts for a customized build, or as completely built units that you can take to the shooting range as soon as you complete your purchase.

Why Should You Buy an AR-15 Pistol?

Firepower is usually determined by size, with large shoulder-fired weapons being considerably more powerful than their smaller handgun counterparts. In this case, the AR-15 pistol offers the ideal ‘size to firepower’ ratio since it is much more powerful than many, if not most handguns.

At the same time, many such ARPs fire very potent military rifle caliber cartridges at velocities above 2000 feet per second (fps). Moreover, such weapons are usually mated to high capacity (typically 30 rounds) magazines. All of this is available in a portable package that can be carried and used inside a car, a home, or any other tight space.

In a nutshell, if you own an AR-15 pistol, you will be able to protect yourself with a semi-automatic rifle on a platform the size of a pistol.

There was a time when AR-15 pistols were not very popular due to the lower velocities produced by their barrels. There were also issues with unburned powder and excessive muzzle flash and blast. However, today’s crop of cutting-edge weapons and the development of ammunition designed for such small AR pistols have eliminated all such problems. This means that you can enjoy the hard-hitting and proven man-stopping power of the legendary M 16 in a package the size of a large handgun.

Furthermore, AR-15 pistols are not just restricted to 5.56 rounds alone. There are plenty of pistol variants available as well, (such as the AR 9) that can fire the 9×19 caliber rounds. If you want powerful hand cannon, the .300 BLK would be ideal since it’s one of the most powerful AR-15 pistols around.

These weapons enable you to reach out to considerably longer distances than any handgun in the market. At the same time, they recoil a lot less and you have 30 round mags to ensure that you don’t run out of ammo in any situation when you need it the most. So without any further fanfare, let us check out some of the very best AR-15 pistols available for sale in 2022.

Just about anything you buy from Daniel Defense is bound to be a rock-solid buy. However, the DDM4 PDW.300 BLK is as good as it gets. The weapon comes with a 7-inch barrel and the whole package clocks in at barely 20 inches or so overall.

This AR-15 pistol is one incredibly small and neat package. Since it’s a DD product, you can expect it to run flawlessly, and the firearm’s overall fit and finish is par for the course as far as Daniel Defense is concerned. The overall feel is that of a full-sized rifle but in an easy-to-use pistol configuration.

ZEV’s CORE ELITE Pistols have been created keeping in mind serious shooters who want the very best. In fact, the ZEV brand is renowned for its commitment to performance, cutting-edge design as well as the fit and feel of every weapon that leaves its production line. The ZEV Tech Core Elite is another chip off the ZEV block. One that features the very same high quality and aesthetics typical of all ZEV products.

The Tech Core Elite combines traditional mil-spec controls with highly functional upgrades. The weapon has been designed to deliver excellent performance both on the field and at the range.

Palmetto State Armory sells great products at even greater prices. Their PSA 10.5 inch AR-15 pistol is also one such high-quality budget offering that gives excellent value for money. It comes with a fluted flash can as standard, while the 10.5 inches has been constructed of tough and durable 4150V Moly steel. The weapon has been chambered in 5.56 NATO and sports a matt black anti-scratch phosphate finish. It has a six-position anodized buffer tube that can be adjusted as per user requirements.

All true connoisseurs of the AR 15 would be acquainted with the Geissele brand. From their incomparable triggers and LPKs to their complete AR-15 build, Geissele Automatics is a byword for top-notch quality products. Their AR-15 Super Duty Pistol is yet another offering that is sure to enhance Geissele’s already formidable reputation.

The Wilson Combat (AR-15) ARP Tactical pistol is truly an outstanding choice for both vehicles as well as home defense scenarios. It exhibits the accuracy, reliability, and the overall attention to detail for which the Wilson Combat brand is widely and justly renowned.

The Wilson Combat ARP uses the time-tested original direct-impingement gas system. After all, this system has been a byword for reliability and accuracy for well over five decades now.

This Stag Arms 15 Tactical 7.5″ Pistol has been built with concealability and maneuverability in mind. It has a 7.5-inch barrel, which makes it a true pistol-sized carbine. The barrel has a 1 in 7-twist rate and the firearm is chambered in 5.56 NATO caliber.

Its size makes it ideal for home defense and as a car carry weapon. It has been equipped with an SB Tactical SBA3 pistol brace. It has an M16 BCG and a weapons-grade 7075 T6 aluminum receiver

All of the above AR-15 pistols are ideal for home defense and automobile carry. Their short barrel size prevents them from being grabbed in the close confines of your home. At the same time, they provide you the high capacity and the superior stopping power of a full-fledged military rifle cartridge.

They are also great companions for a casual day at the range, or even a tracking expedition since their small size makes them easy to carry in a backpack. Rest assured, you can’t go wrong with any of the above rifles in your collection.