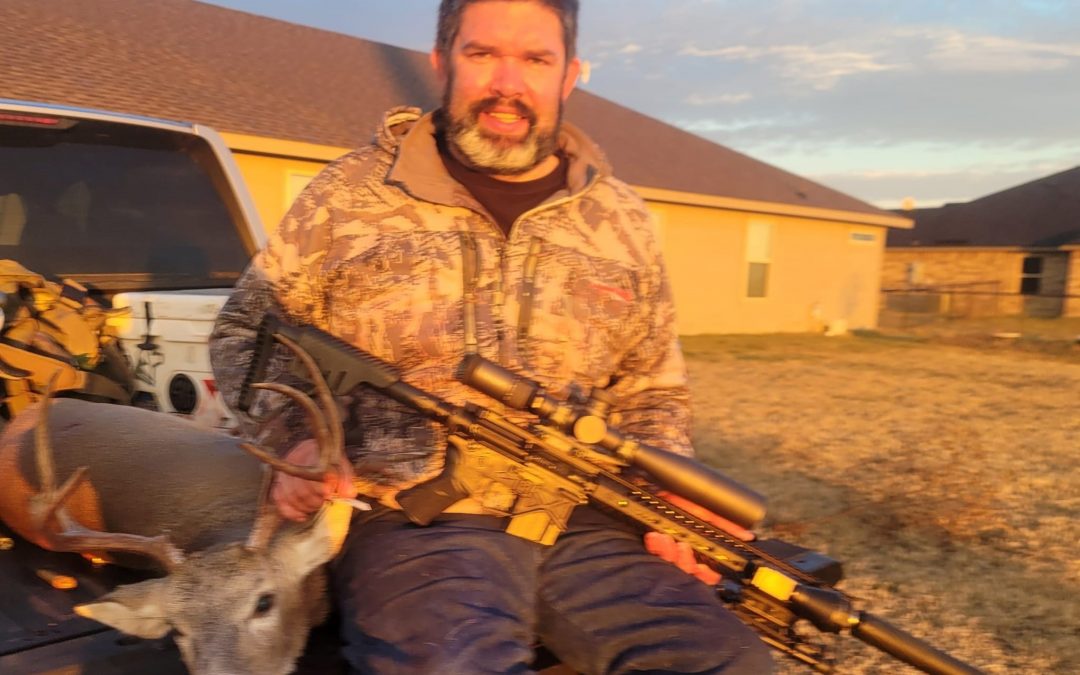 This buck had been observed on camera running off with other bucks and was one that needed to be harvested. It was a pretty mild winter morning with fog around the stand just before legal shooting time.

As legal time arrived, Jason heard the sound of two bucks fighting but couldn’t see the animals enough to take an ethical shot. There was a south to north wind and his blind was east of the fighting bucks.

It was an inconsistent fog and he observed the wind blowing the fog north and could tell he would have a limited window to make the 110 yard shot if the deer stayed put.

They did and as the opportunity presented itself, Jason saw a small (illegal) “forky” buck making his way north as what appeared to be a nice eight pointer ate grass where he had heard the fight.

As the buck quartered away Jason took the shot. The buck ran about ten yards and collapsed. Skinning him out confirmed a perfect double lung shot and provided some nice antlers for rattling next season and a good sized deer for the freezer.

Stag Arms was founded in 2003 and has been a leader in the development of AR firearms platforms. Stag Arms was the pioneer of the modern left-handed Modern Sporting Rifle. The team at Stag Arms continues to work on different calibers for AR platforms for right- and left-handed customers.

The Stag Arms Stag 15 AR-15 is a great AR 15 due to its high-quality upper and lower receiver parts, excellent fit and finish, accuracy, and reliability.

The upper receiver is a forged aluminum upper, mil-spec upper that is quite common in today’s AR 15 market. The Stag 15’s barrel has a 1:7 twist. It’s also chrome-lined, which will make it easier to clean and more durable.

The Stag 15 lower receiver is basically a standard mil-spec lower. It’s a forged receiver, which is good because it will be stronger and lighter than a standard billet receiver. Stag 15 Pursuit Hunting Line Rifles are specifically built to order.

We don’t have an affiliate account with this merchant, so just put the link in the article for convienence.