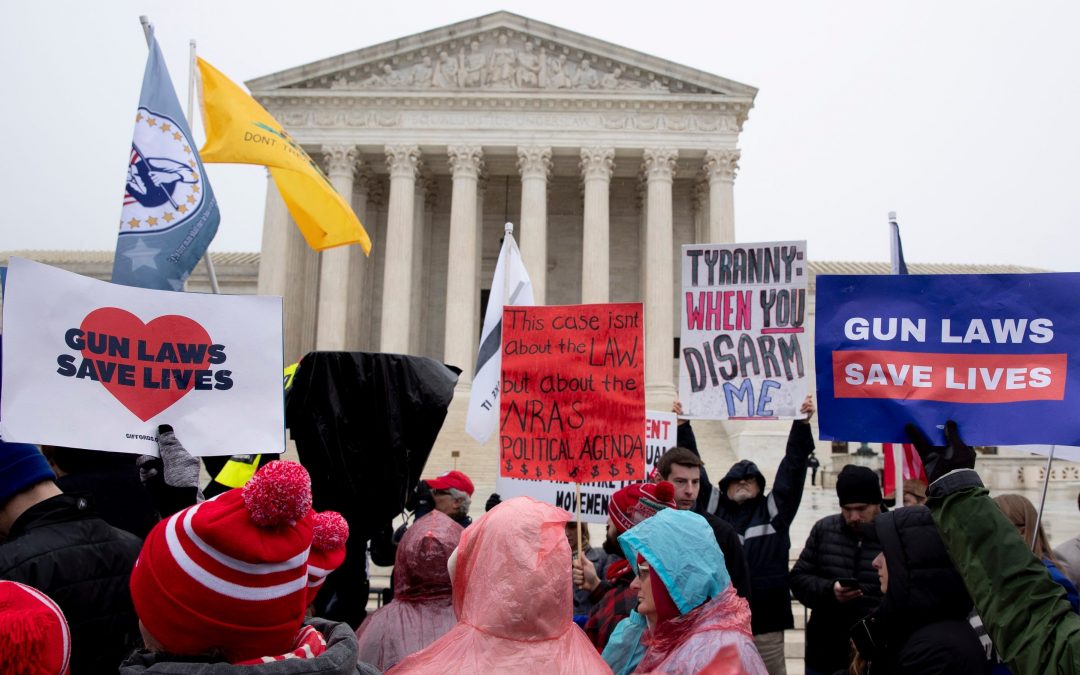 It is a case that could change the course of American history.

New York State Rifle & Pistol Association v. Bruen is expected to be decided by mid-2022. It could make a New York state ban on concealed handguns being carried in public places unconstitutional.

A ruling in favor of the plaintiffs, which includes a National Rifle Association affiliate could allow for looser gun regulations in many areas of the country. It could also affect the Second Amendment analysis of all future weapons laws.

Oral arguments will be heard by the court on November 3.

It’s been long in the books

New York established a handgun permit system in 1911 after an increase of homicides. The permitting system was modified to allow concealed carry in 1913.

A permit application is required to allow someone to carry a concealed gun for self-defense in the State. This has been done for more than 100 years.

An applicant must demonstrate a need for self-protection that is distinct from the community to obtain an unrestricted license. This could be done by proving they are being stalked.

New York’s lawyers defend this restrictive approach to issuing concealed carrying permits as an effective way to reduce gun violence. There were 43,592 gun-related deaths in America in 2020. This includes suicides and murders. Each year, there are over 80,000 non-fatal gun injuries.

New York has some the most stringent gun laws in America, with a homicide rate that is lower than the national average.

Koch received a license to carry concealed handguns for self-defense when he was on his way to work.

Both plaintiffs have concealed handgun licenses that allow them to carry concealed guns for target practice and hunting, as well as self-defense in areas not commonly used by the public.

Together with the NRA’s New York affiliate Nash and Koch, they claim that these restrictions on their ability carry concealed handguns violate their right of bear arms. They claim a broad view on the right to carry handguns, which extends practically “whenever” and “wherever” self-defense may be needed.

New York’s law is contrary to the Second Amendment.

The Supreme Court will consider Bruen and focus its attention on an important precedent: District of Columbia v. Heller.

In 2008, the Supreme Court’s Heller ruling struck down Washington, D.C.’s ban against handguns at home. A 5-4 majority of the court members voted down the decision. For the first time, the court ruled that the Second Amendment is a protection for an individual’s rights to keep and bear arms.

Justice Antonin Scalia, who wrote for the majority, stated that the “central component of the Second Amendment” was not a “well-regulated Militia,” but “the inherent right to self-defense.”

The majority’s decision contained cautionary language, which lower-court judges have relied upon to uphold gun laws.

Scalia stated that the Second Amendment does not grant an unlimited right and that it is “not a right of any person to carry or keep any weapon in any way whatsoever.” Scalia’s opinion included a list “presumptively legal regulatory measures”, such as bans on firearms being carried in schools or government buildings and restrictions on felons possessing firearms.

NRA and gun rights advocates have reacted with outrage at the acceptance by judges of firearms-restricted laws as constitutional.

Bruen was the result of this discontent.

Concealed handguns are being allowed in more and more states

The majority of Americans lived in states that banned concealed carry or allowed concealable handguns. The NRA’s late 1980s push to loosen public carry laws across the country led to a widening of these restrictions.

They hope that Bruen will be able to achieve through the courts in states with gun rights advocates who have very little influence.

New York is today one of eight states that require concealed handgun owners to have a “proper”, or “good” reason. Similar laws are in effect in California, Hawaii, Massachusetts, Massachusetts, New Jersey, Rhode Island, Maryland, Massachusetts and Hawaii.

Americans living in New York could see an increase in legal handgun owners in their communities if the court overturns New York’s law. It would be easier for anyone who wishes to carry concealed handguns.

A ‘text history and tradition test’

Bruen could be a turning point in how judges assess all Second Amendment cases, regardless of whether they are about assault weapons or felons-in-possession offenses.

Judges have deemed that such restrictions are justified by current safety concerns.

Many gun rights advocates want the Supreme Court not to accept this approach. They want judges to rule on cases solely on history and tradition, unless the Second Amendment is interpreted by the judiciary. This is called the “text, tradition and history” test.

Justice Brett Kavanaugh is the one who first articulated this test in a dissent that he issued before his rise to the Supreme Court. Clarence Thomas, Neil Gorsuch, and Amy Coney Barrett have all adopted similar judicial philosophies in some way.

But there is a catch. Guns are regulated in America since the beginning.

New York’s regulations have been in place for more than 100 years. They also have a long history.

If the justices abandon the traditional approach to the text, history, and tradition test, I expect a new round in lawsuits against weapons laws that have survived previous court challenges. Gun rights advocates could sue for restrictions on large-capacity magazines and safe storage requirements at places that have been settled.

Judges would have to decide on this litigation based on a complex historical exercise. This involves comparing current laws regarding guns and gun violence with laws, practices, and weapons from a past era.

Trump’s justices could tip the balances

There are three options for the court.

It could uphold New York’s law. It could also strike it down. It could also find a compromise, like issuing a narrow ruling which doesn’t raise big questions about gun restrictions further down the line.

John Roberts, Chief Justice, has guided his colleagues to narrow rulings in the past. He will lose little influence if the three former president Donald Trump-appointed justices team up with Samuel Alito (the court’s other conservative justice) on a broad majority opinion.

Trump met with the NRA to discuss Gorsuch, Kavanaugh, and Coney Barrett before he nominated them – all of whom were granted the blessing by the gun group. Their presence at the court will be highlighted in the ruling.